I can't help but use the overexposed cliche'..... It was the best of times, it was the worst of times.
We showed up Friday night at the Canyons for the racers meeting. Pretty un-eventful other than I have never been in a room with a skinnier bunch of mofo's in my entire life. Costavich thought he was the heaviest dude in the room of 150 people and he was probably right. 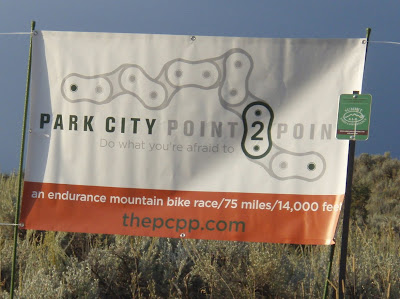 Saturday we arrived in Round Valley around 6:30 to perfect temps and partly cloudy skies. I waited in line for 20 mins to use the one crapper on site (my only complaint about the logistics of the entire race) threw on my gear and lined up at the back. The start was faster than I thought it would be but I had no intention of going out too hot early like I did at Laramie so I took it easy through Round Valley. About halfway through Round Valley I started feeling a familiar bubbling down low and knew I needed to make an early pit stop as we exited Round Valley. I dropped some extra weight at the Round Valley toilet. I've never had to do that at a race but didn't think that much of it. Leaving Round Valley I pointed my bike toward one of the coolest rainbows I have ever seen framing the climb to Prospector. 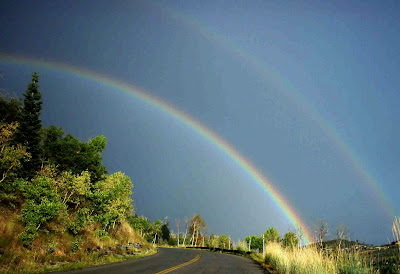 Where there's a rainbow there is of course rain and it started pouring as I summited Skid Row and started around Prospector. Even with the rain making thinks sloppy this was the highlight of my race. The course wasn't closed but between the rain and the 100+ racers ahead of me I was pretty sure it would be safe to blaze through Prospector as fast as I wanted. I passed about 5 people on Prospector, another 5 or so on the Snowtop climb and a few more on the Deer Crest climb up to Silver Lake. This section of the race was all firmly in "the best of time". I was on a high. My pace was sustainable, the trails were great and I was having the most fun in a race I've ever had. 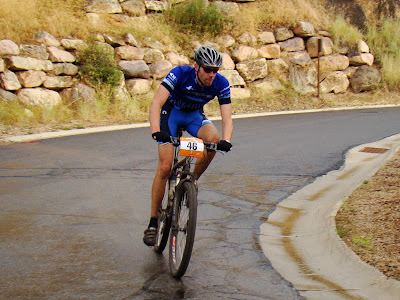 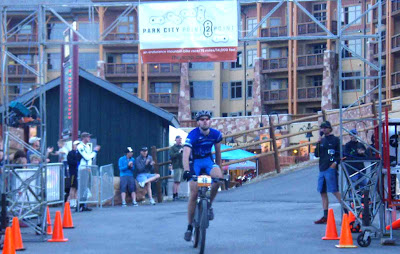 It was an excellently run race and I'll definatly do it again but absolutly not solo. Well.... probably not solo:)
Posted by Andy H. at 1:50 PM

glad to hear you finished.

when i saw you on my first two road crossings that i was holding up traffic for the riders, you didn't look that bad. i thought that you would be farther up into the group, but maybe you were conserving energy.

stomach distress is the worst in a race. i have a super fast metabolism and am very sensitive to some foods while racing. seems like the harder i work the more sensitive i get.
any short chain sugars set my stomach off.
the coke you drank would have killed me.

hammer nutrition uses long chain products for energy and unless you use too much(which you didn't) they are easy on the system. go to their site and read thru some of their stuff.

way to persevere, I think the answer is kippers, at least thats what BK tells me.

It was the carbonation in the Coke that settled my stomach (at least for a short period of time) otherwise the HFCS would have done me in for sure. Now if I could only find a way to put carbonated Mexi-Coke in a camelbak and have it not lose the carbonation all day I'd be golden.

Andy, you are my hero. You looked like shite at the PC aid station. I wanted to tell you to quit the race, get your blankey and start sucking your thumb, but I knew that wasn't what you wanted to hear.

I totally don't feel bad for you at all if you plan on doing that solo again next year..bonehead.

Andy--Great job!! That was one tough race, I wasn't even jealous that I was volunteering and not racing :) Truly--way to go!

Way to stick with it. Looking back, I'm sure you're glad you did. Hope to see you back there next year.

Congrats Andy - way to hang in there. I have to tell you I am very impressed. My last two long runs my stomach has been trashed and I was miserable... I know how horrible that feels. I'm hoping this wont happen in the mid mountain marathon this Saturday... I will be looking at your race as inspiration to get me to the finish line. Well done.
Karen

Amen to the Mexi Coke. Next year drop coolers filled with the sweet goodness at all of the aid stations. Three mung bean cakes would have provided enough solid calories. I'm still experimenting with te stuff but I think it has potential.

Anyway, awesome ride. I wish I had the balls to try something crazy like that!

Way to gut it out. Nothing like racing on not enough energy and a lousy GI tract.

Oilcan is on crack if he thinks Hammer would have made the difference. If you tried doing a race that long on the Hammer system, you'd feel fine for four hours and then suffer an unrecoverable bonk. Their "long-chain" schpiel is a pile of garbage. Mexi-coke is where it's at.

I had my first mexi coke the other day and I have to say it was just too sweet. I am sticking to Diet Coke.

Great job. Just finishing that beast is a huge accomplishment.

I bet you do it solo again next year.

Your effort was phenomenal! Good job. Sorry I made you feel guilty about potentially quitting. It was easy for me to do since I was all done with my half and drinking tasty barley pop.

I'm with Oilcan. Hammer all the way. Made it through seven 5- to 7-hour days in BC on mostly the Sustained Energy plus oranges and PB&J wedges. However, I have a stomache of steel and don't ride that fast anyway. Maybe Mexi Coke would make me faster.