Thursday night I ate it pretty bad at Dr. X's Sugarhouse clinic. I was descending a fast grassy slope chatting with J Dub and next thing I know I'm landing full on my left shoulder. I was barely able to limp home riding one handed and immediately hit the ice and vitamin I. Friday California Bob was in town and we had plans to ride Super Crest. Not wanting to bag out on plans made months in advance I sacked up and did the ride. It hurt like hell at times and I walked a couple sections that I would have needed both arms to clean but this time of the year you can't let a minor thing like a sprained shoulder keep you away from that ride. Saturday we spent most of the day at a BBQ relaxing and Sunday I planted 150 bulbs in the front yard one handed. Over the weekend my shoulder seemed to be healing pretty fast but over the last couple of days the healing has plateaued. I cant lift much with that arm and carrying a bike is out of the question so on the official injury report for Draper's CX race I'm listing myself as questionable. We'll see how the rest of the week goes.
Posted by Andy H. at 7:35 AM 3 comments: 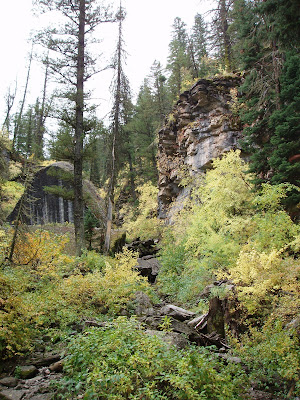 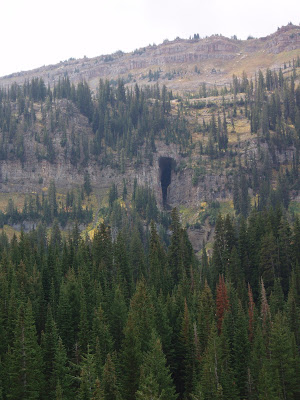 The day after Moosecross we hiked to the Wind Cave northwest of Victor. It was a pretty cool hike and the fall colors were spectacular but the 1800 feet of climbing over 2.6 miles worked over my non hiking legs.

Last night I embarked upon a long overdue project. Bike Cleaning. It took me over two hours and I couldn't decide what was worse. The fact that we own eight bikes or the fact that I'm so lazy that they were all long overdue for a cleaning.
Posted by Andy H. at 12:28 PM 3 comments: 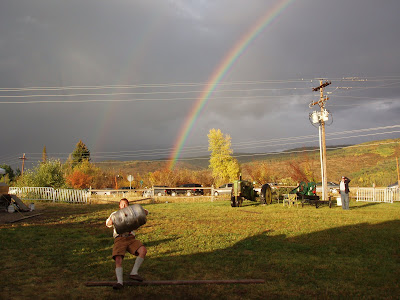 This is truly what is at the end of a rainbow. A Leprechaun tossing a keg 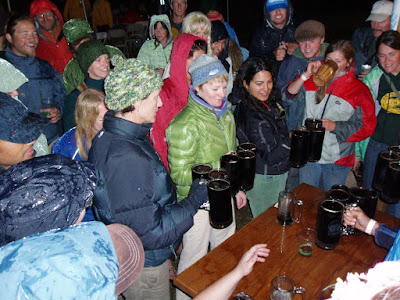 Rhonda likes her beer dark, bitter and plentiful. I'm glad her taste in men isn't similar.
Posted by Andy H. at 7:55 AM 2 comments:

We woke up Saturday morning in our B&B to the pitter patter of rain on the roof. All through breakfast it poured buckets on and off and I started getting excited for a mudfest of the ages. After breakfast we got our gear together and headed the five miles down the road to the venue arriving to mostly clear blue skies. No more rain but at least the course will still be wet right? Wrong! It rained all morning five miles up the road but the course had only received light sprinkles. We headed out on our warmup laps to very un-crosslike conditions. Very dry and very dusty.

Rhonda's group raced first. She hung with the leaders through most of the first lap but gradually fell back as her lack of saddle time due to a myriad of injuries over the last six weeks caught up with her. She finished 7th out of 15 or so but two of the girls who beat her moved up and did the A race later finishing in the top 10.

For my race I got a call up to the line. The race organizers must have sensed the cross demon lurking within me and wanted me up front where I belong (It also might have been that the call-ups were based on time of registration but I'll go with the former idea). My cross demon decided to stay hidden till another day and I was quickly but in my place near the back. I rectified that during the first run up where the mad skills that Kathy and Ali taught me burst out and I loped (I'm too tall to call what I do running) past 5-6 people. I passed a few more people on the 2nd barrier section and settled in with a small group in the middle of the field. The rest of the race was basically me gaining a ton of time on the straights and getting killed by the MTB'ers on the tight corner sections. By the end of the race the corners were so loose that I was buried to my spokes at times and had no traction while the guys on fat tires just floated through. I finished 10th out of 20+ which I felt pretty OK with for my first cross race. I was clean through the barriers and kept my intensity up the whole time. I raced pretty well but got killed in the multiple 180 deg corners. I'm thinking the 30c tires that came on my bike aren't going to be meaty enough for some courses so I'll probably look into an upgrade to some 35's.

Cyclocross is wicked fun. In MTB races I often have trouble maintaining intensity and focus because I usually spend most of the race by myself. Everybody in my category is either five minutes ahead of me or 5 minutes behind me and there are so many people on the course I have no idea who's who. In cross there is always somebody near by and they're always direct competitors. You always feel like you're battling (even if it is for 10th place). Also you don't have to worry so much about saving energy for the next climb. You just pin it and go. The only negative to that is that it hurts like hell all I wanted to do was finish the race but as soon as I was done all I could think about was my next race.
Posted by Andy H. at 8:24 AM No comments: 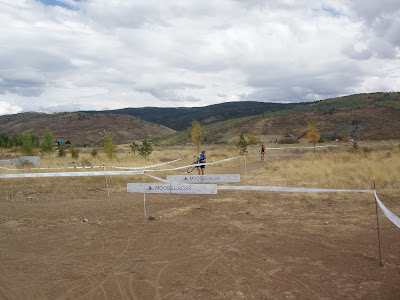 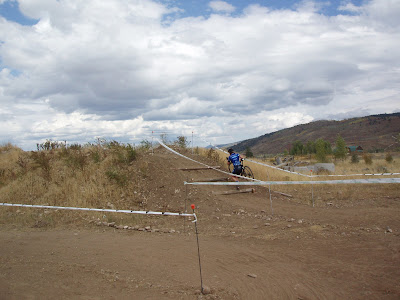 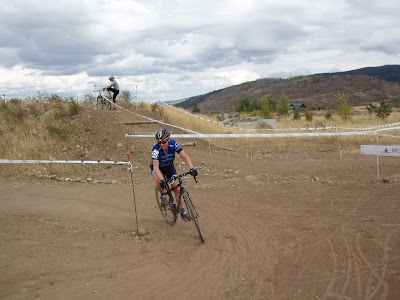 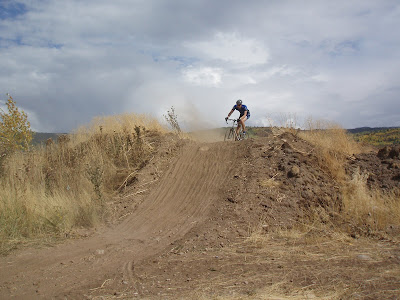 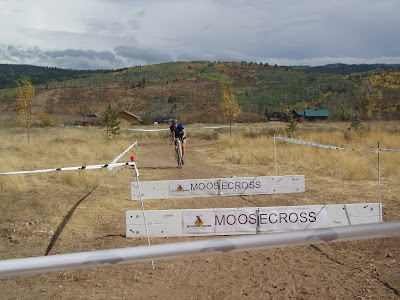 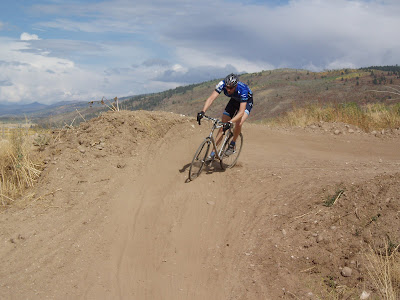 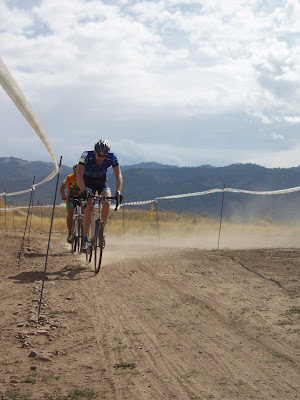 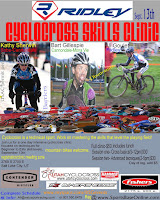 This one time at Cross Camp, Ali made me do funny things with my bike.

In all seriousness the Ridley Cross Clinic on Saturday was amazing. I've never gained more two wheeled knowledge in one day in my life. Ali and Kathy took control of me and the rest of the newbies from the start and lavished us with one on one attention. We went step by step through the mount and dismount until we had all perfected it and then moved on to cornering, braking and finally a simulated mass start. I caught on to the whole thing pretty quick and by the end of the day was able to hit the barriers at full speed. I signed up for Dr X's Thursday training sessions and will be able to hit most of those so I should have the technique down pat by the end of the season. Now if I could only get that top end fitness thing going. 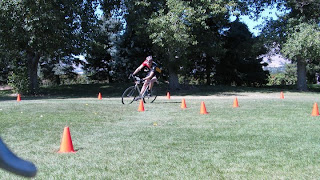 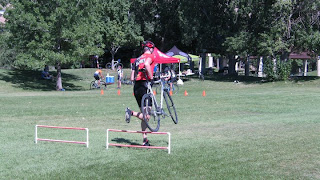 Yes those are full size barriers, they just look like the kiddie ones. 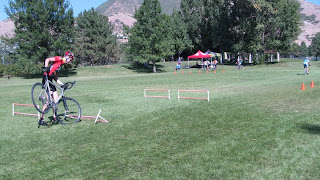 I did say "hitting the barriers full speed" 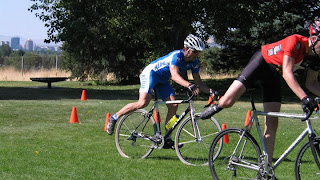 Synchronized dismount
Posted by Andy H. at 10:19 AM 3 comments:

Steve, Rich and Ken joined me on Saturday for what I have decided will be an annual ride I've christened Spanker Crest. It was the absolute best mountain bike ride I've done hands down. I was a little nervous heading into the ride and felt like I might have some trouble keeping up with the group. Rich is an accomplished Iron Man, Steve destroyed all comers in the ICUP this year and Ken killed it in the Tour de Park City this summer. I did myself proud and by feeding well I was able to hang all day.

We met at the base of Millcreek at 9am and headed out around 9:30ish. The plan was to ride up and over Emigration to the base of the Mormon Pioneer trail, Pioneer trail over Big Mountain, down into East Canyon and over to Jeremy Ranch. Lunch stop at the Jeremy Store, cross the freeway, poach the private singletrack in Pinebrook and climb it up to Mid Mountain. Mid Mountain all the way across to Spiro, Powerline, Scotts Pass and finally Wasatch Crest trail back to Millcreek. My rough estimate for the ride was 60 miles. It ended up being 78 miles with almost 10k feet of climbing taking 10 hours start to finish.

What a sweet ride. The trails were all in perfect condition and the weather was amazing. The Pinebrook climb is lung searingly steep but the trail is buff and has very little traffic. Mid Mountain from Pinebrook to the Canyons can't be beat. Crest is in the best condition I've seen all year as were the Millcreek trails. The only negative to the whole ride was by the time we got to the top of the road at Millcreek at around 7pm the temperature had dropped to 47 degrees. I didn't have a jacket which made for an interesting descent down Millcreek.

My main goal for the ride was to feel human at the end. When I walked in the house around 7:30 Rhonda expected me to be a zombie, crawling around moaning for food as I've done many a time after big rides. Instead I was able to hang my bike up, put all my gear away and hop in the shower without a problem. During the ride I drank 128 oz's of my homemade energy drink, 64 oz of water, 4 gels, 2 bags of Cliff Shots, a bag of peanut butter pretzel's and a giant Pumpkin cookie. That's more sugar than I usually eat in an entire week but I burned every calorie of it plus some during that ride.

I'm taking reservations now for next years running of the greatest MTB ride in the Wasatch. Spanker Crest 2009.

**update** I estimated the climbing at 10k feet but according to Rich's Garmin is was actually over 13k feet.

Hit the Pipeline trail last night on my recently converted to Stans Tubeless cx wheels. After mounting I felt the setup was pretty solid since the bead on my Kenda Kwick Cross tires were a byatch to pry over the rim. I can't see that tire rolling off for anything. The ride proved to me the instant value of tubeless for cross. I was very careful on the DH to avoid any large rocks but even with running 45 lbs in my tires I still pinched the rear tire into the rim multiple times. This obviously would have led to an instantly pinch flatted tube had I not been tubeless. Add in the protection from the Wheeler goatheads and I feel like this setup is the way to go.

Only a week to go till Ali's Ridley CX camp and then the season kicks off the week after that with MooseCross. It's strange. I think I'm more excited for cross than I was for MTB racing this year even though I'll probably just spend the entire CX season getting shelled by the roadies.
Posted by Andy H. at 8:32 AM No comments:

Holiday weekends are never holidays for me. What I think happens is that mentally I think to myself "self, you have an extra day to get things done so lets go crazy". This weekend I leveled the yard around the backyard patio I installed earlier this year, I converted my cross wheelset to Stans tubeless, got in two nice road rides, hit two BBQ's/parties and finally did this to my front side yard. 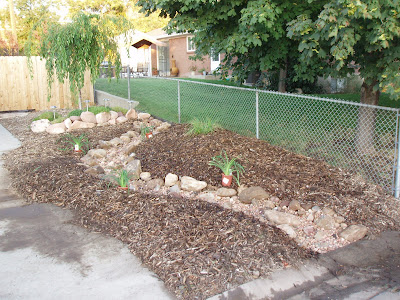 Prior to this weekend the tree was there but nothing else. I ran out of steam at 8pm last night so tonight I need to plant the plants, run drip lines and clean up the mulch but I think it turned out really nice.